Whenever I look back on my past 11 years of cosplay, the thought of reviving some of my past cosplay costumes came to mind.  I was thinking that I should try applying what I know now on costumes that were back in the day, the best effort I could give with whatever budget and material limitations given to me on that particular point in time.

Listed here are my top five costumes I would like to repeat again, this time with better materials and techniques.


Jake Rockwell of the Centurions
[Status: destroyed and recycled]


This costume made its debut back in 2002 Culture Crash Convention.  I was a huge fan of the Hanna Barbara cartoon Centurions (who btw, was one of the first western shows that applied/hired Japanese animators to do the striking signature visuals common with anime today).  I had it down pat on accuracy regarding weapon systems being removable, but on the weapon design itself I used whatever available similarly shaped materials at that time (soda bottles, bottle caps, etc).  And the shoulder bazooka was originally designed to launch a styrofoam missile, in which the rubber band trigger snapped at the last moment onstage.  Not to mention the paint job, which has none whatsoever.  It was solely dependent on the color of the rubber sheet, as my limited savings as a student (plus some art sidelines) did not permit me buying any paint and brushes.

I always considered recreating this one, but I often hesitated, as I wanted all three Centurions to be present.  Kinda like the cosplaying the Three Musketeers with just one guy showing up.  So until the day I actually convince two more people to cosplay the other Centurions, this one would be placed at the bottom of the priority list.

Here's a sample video of the series I used to cosplay. Click on the pic to open a new window to YouTube. Enjoy! 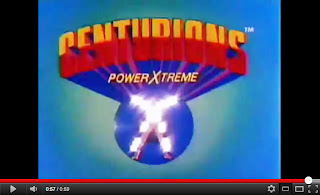 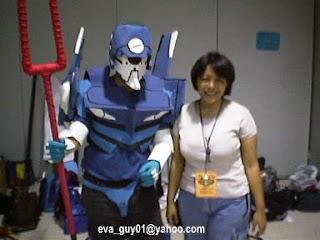 
I was never happy with the outcome of this costume, even though I can safely say I was one of the very few cosplayers worldwide to ever cosplay Eva-00 of NGE back in 2001.  Looking back, it was a terrible costume.  Granted the upper body was more accurate than my older Eva-01 but let's be honest, I was wearing black jeans where its supposed to be white armor.  The shoulder fins were made of rubber sheet, but it was wobbly.  It was simply a hodge-podge costume made in a rush.  Another reason why I gave this a thought is because no one else in the cosplay community decided to cosplay it.  I saw the wonderful rendition of Robert Ong's Eva-01 and NERV Pilipina's Eva-02, but nobody seemed to bother to cosplay Rei Ayanami's giant robot.  It's sad, at least for me.  So much that maybe, just maybe if I can shed some pounds I may do it again just to relive the love. 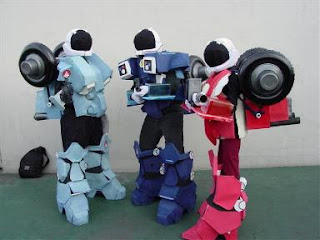 Robotech (and later, the original Macross, Mospeada and Southern Cross) was for me the most epic English-dubbed North American licensed anime and defined my love to the art of anime mecha.  So it was only natural that I chose Scott Bernard's Cyclone Mecha (or more like exosuit).  This was my first cosplay costume where I had one part of the costume commissioned, which was the helmet, made by a costume maker in Divisoria called The Feather Shop.  They hurdled the problem of domed visors by making a chicken-wire mold and then covered it with black cloth, which was semi-transparent but because of the cloth, looked like some sort of one way glass (we can see outside but our faces are still obscured).  Although I saw this costume as a success, I still wanted to take another step and make the costume more anime-accurate by making it transform from exosuit to motorcycle.

After studying the design, I knew it would be possible with lightweight aluminum frames.  Its just a matter of when I can showcase the costume, at a con that would be the most appreciated (oh when will there be a Philippine version of Macross World Con or Robotech Con?). 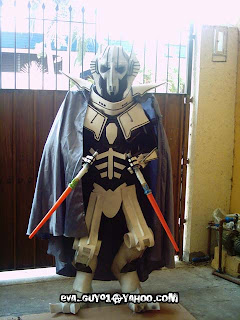 This costume has its similarities with my Eva-00 cosplay: wonderful innovation but half-assed production. The wonderful part is that I was able to replicate the character's signature move: his arms splitting to four, each with a lightsaber in hand.  But the legs fell apart early in the event and most of my pictures afterwards looked liked my character was suffering from polio.  Plus it had no lights for eyes and I felt it wasn't mechanical enough to make it look like a droid/cyborg.

And add to the fact that the costume was made for a convention that will come out mere days after the first showing of Star Wars Episode 3, so my main source of inspiration came from the Star Wars Cartoon Network version, which by the way, was more kick-ass than his movie counterpart.  I'd like to one day get the chance to improve on the costume, maybe make the head more as a hat with mechanical parts, to make it more menacing in size, or perhaps give justice to his allure as a warrior that doesn't rely on the Force to fight. 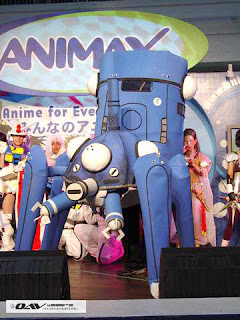 Tachikoma of Ghost in the Shell: Stand Alone Complex
[Status: abandoned and disposed by mall]

This would probably be my best mecha costume due to its quality vs budget ratio: the costume you see in the picture only cost me less than P980 total.  It was made from scrap, bamboo and 1mm rubber sheet skin.  It had no electronic sounds or lights, and my legs were sticking out of the bottom of its abdomen, as the whole idea was based on a wheelbarrow.  I left it at the con grounds after, since it was more expensive shipping it back home.  The event organizers didn't mind and I don't know whether they took it home whole or used its parts for scrap.


I thought of trying it out again since the design base is very simple, but this time with a bigger budget and better materials.  Maybe I can make a design that would require me to completely ride the costume, or make the costume more size accurate, as my original cosplay was a foot shorter than the anime specs.  Also, some of my friends wanted to cosplay characters from the anime, in particular the main character Major Makoto Kusinagi, and would love to have a Tachikoma with them during the convention.  It's something to think about, especially since one of my friends already cosplayed her, and cosplayed her very well. :D

So this is my wish list for either this year or the coming years, depending on my current situation and budget constraints.  I wont mind creating new costumes, but sometimes you got to go back and revive the love of the character because I felt it wasn't enough back then.