5 Reasons why you should know Goldy more

Not many people know Goldy, known in Japan as one of the best cosplay craftsmen and cosplayer around.  But then again, not many people are really into mecha, armor and hands-on crafting in general.

But to tell you the truth, if you don't know Goldy, you're missing a lot about knowing one of the legends of cosplay.

In a nutshell, Goldy has been inspiring a small community of cosplay/mecha enthusiasts into building their own seemingly impossible mecha or armor costumes, and back then around early 2000's.  If you've been around that time and you see pictures of this awesome "Gundam Guy" floating around forum sites, and even 4CHAN (admit it, some of you have been there often), he would be THAT "Gundam Guy".  Some cosplayers look up to him as inspiration that they themselves created works equal to his. One of them notably is Clive Lee of Singapore (yes, the other "Gundam Guy").  Honestly back then I tend to mistake them both as the same guy, before I got the chance to meet Clive online and in person.  So if this bit of info doesn't convince you, perhaps these 5 other reasons will:

1) He's been cosplaying mecha for about 10 years.  And its not just 10 years, with certain year or two in haitus, but 10 years of continued mecha and armor making.  That makes him a guru on anything mecha costume related (Why guru? More on that later).


2) In those years, he made 11 very well made mechas and armor.  Not including the numerous quality props he made for himself and other people.


3) He teaches other people how to build them.  He conducts workshops in Akihabara, with plenty of satisfied attendees. Plus he uploads them at his Youtube account.  Of course there is always the problem of the language barrier but fortunately there are videos that had interpreters or english-speaking assistants to help him out.  Check out his website Gadget Tool for more info regarding workshops.


No, that guy is not Goldy but one of his assistants/students helping him out in
demonstrating one of his techniques in making a body part mold.  This clip is
amusing because it does show Goldy in action, but his face is off-camera. XD

4) He's been featured in several well known websites and publication, like Cosplaygen, Anibee.TV, London's Costumerism,  Cosplay in America's Tumblr, website and book, and All-Nippon Airlines (ANA) Cool Japan website.  And I'm sure you've seen his cosplays in 4Chan as well.


5) He's been around a lot.  His work had made him a representative for Japan's World Cosplay Summit in 2006, in which he won a special award for his craftsmanship.  He also became an invited guest, judge or speaker for numerous events not just in Japan, but in Korea's World Cosplay Festival 2008, Thailand's Animation & Multimedia (TAM2007), Singapore's Cosplay Challenge 2009 and Asia Cosplay Meet 2012, London's MCM Comic Con and as far as USA's Anime Expo.

Now he is now visiting the Philippines for the first time as a guest at the premier cosplay-centric event, Cosplay Mania.  Even other famous cosplayers like Reika is excited to see him that she even announced his visit at her own Facebook Page. 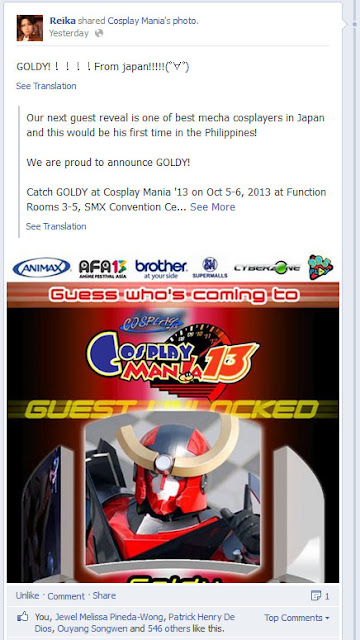 I'm pretty excited myself.  If these reasons aren't enough to make you want to meet him, I don't know what will.

For more information regarding his visit, head on to http://www.cosplaymania.com/.

You may follow them for updates at
FB: /CosplayMania
Twitter: @CosplayManiaPH
Google+ http://gplus.to/CosplayMania
Posted by eva_guy01 at Friday, August 23, 2013 No comments: